Ockenden International has given £3,000 (US$4,750) to its Tibetan exile school project at the Gongkar Choede Monastery near Dehradun in northern India.

The money enabled the school to purchase computers for use by its pupils, young monks who attend classes at the school. 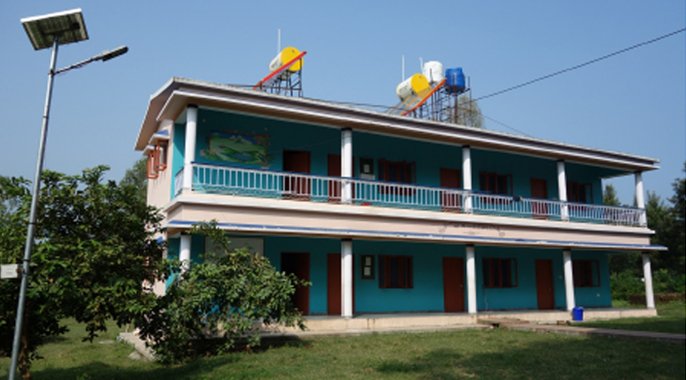 The building houses trainee monks, giving them the opportunity to develop their vocation in the Tibetan language, which has come under growing pressure since Tibet was occupied by China in 1951.

Ockenden International channelled its funding through the Nangchen Children’s Trust which has a presence in the area. The grant is separate from the annual Ockenden International prizes for refugee projects and was made possible by a legacy from Mrs Felicity Summers, who gave enormous support to exiled Tibetans during her lifetime.

The original Gongkar Choede Monastery was founded in 1464 in the Lhoka district of Central Tibet, where for almost 600 years it contributed to the traditional, cultural and political aspects of Tibet’s Buddhist culture.

In the 1990s, a group of its monks escaped to India, in search of their chief spiritual leader.  Gongkar Choede Monastery was inaugurated by His Holiness the Dalai Lama and His Holiness The Sakya Trizin in 2003. The monastery is in the district of Dehradun, in a forested area neighbouring a small Tibetan settlement. Some 80 monks live at the monastery. Sixty are young monks who attend classes at the monastery school.

The young monks, mostly from poor Tibetan households in Nepal and Bhutan, have been sent to Gongkar Choede to receive religious instruction and education “no doubt with the additional motivation for some parents of ensuring that their child is safely housed and fed and clothed”, Dr McConnachie said.

All of the children are received as novice monks, though most leave the school after a few years and only a small number will take full vows and continue as monks into adulthood.

The monastery’s running costs are supported in part by local families and in part by donations from Buddhist communities in Europe.

The school building funded by Ockenden is a two-storey structure with two small classrooms, two dormitories and two sets of washrooms. Construction was overseen by Losal Dondrup, one of the monks, and Mrs Kirsty Chakravarty.

Losal Dondrup and Mrs Chakravarty sourced all construction materials independently and closely monitored the building works. The result of their effort is clear: “The school is finished to a very high standard and is bright and appealing inside and out,” said Dr McConnachie.

Following the style of a Central Tibetan Administration school in Dharamsala, the young monks sit on the floor and work at low tables. The school has solar water heaters to provide hot water during the cold winters that affect this region. Dr McConnachie said, “The Gongkar Choede Monastery is not grand or ostentatious but it is very peaceful and pleasant and the senior monks I met were sincerely committed to their religion, the monastery and the young monks in their care.

“Most of the senior monks fled Tibet in order to pursue their religious education and have completed many years or decades of formal study of Buddhism since arriving in India. Their primary concern in educating novice monks is to transmit Buddhist philosophy and teaching.

Preserving the Tibetan language and culture is a primary goal of the Gongkar Choede school and religious instruction is the core of the curriculum.

“However, most of the children attending the monastery school will not remain in a monastic environment so it is also desirable that they receive an education that equips them for lay society,” she said. “This is an area that Losal Dondrup is seeking to develop.” Dr McConnachie added.

Tibetan refugees have a long history in the Dehradun region. When the Dalai Lama fled to India in 1959, he lived first in Mussoorie, before making Dharamsala the official seat of the Tibetan Government-in-Exile. Today, the Tibetan settlements in the area have become established communities. 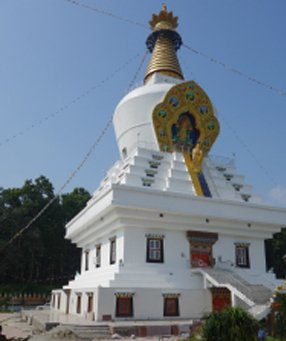 At Clement Town settlement on the outskirts of Dehradun city, Tibetan refugees have built what is claimed to be the world’s largest stupa, a 56.39-metre high (185-ft) Buddhist temple. Inside, the stupa is exquisitely decorated, with intricate hand-painted murals of the Buddha’s life covering every corner of the walls. The settlement also possesses a 31.39-metre high (103-ft) Buddha statue. Clement Town is a popular visitor attraction for the area, and the settlement has restaurants and guest houses which not only cater for the refugee population but also for Indian and foreign visitors.

Another settlement in the area, Dekyeling, is somewhat less affluent and more crowded than Clement Town. Yet when Dr McConnachie visited the settlement, she found an impressive amount of entrepreneurship here too.

“Just one building in Dekyeling housed a glass-blowing workshop that supplied beads to a jewellery designer in Denmark, an incense-making department, and weavers making traditional Tibetan aprons.

“In another settlement, a carpet making factory produced hand-knotted carpets for local and export markets (primarily supplying Tibetan families outside India). In winter, Tibetan refugees run markets selling sweaters and warm clothes. For many years this has been an effective monopoly, operating throughout India,” she added.